I still haven’t received the platform base

I have yet to receive all parts of the bed. One mattress & legs are lost in shipping. Replacement parts reportedly will be shipped next week.

Bought for my parents and they LOVE their new bed. They are getting older and being able to raise the head of the bed to sit up and assist with getting up is a life changer. Virtual customer service was top notch as they answered all of my many questions before purchasing.

I’m sorry, haven’t put beds/bases together yet. My husband is at Hospital still and my helpers for bed can’t come from out of state til next week

Fed Ex. Did not deliver our whole package and then Damaged another delivery. But the company went to extremes to get the bed to us with all its parts and I must say they were extraordinary.

Very nice to sleep on

I've slept on the bed for a almost a week. I had back pain in the mornings on my old bed. The new Leva is pain free. I really like the option it has and the easy "return to Flat" button. So far so good.

Still adjusting to the mattress. Very comfortable and firm. I don’t like the sheets that I bought, they look awful after they are washed and dried. Had I known that I couldn’t return them I never would have bought them.

I bought several products from Leva and liked all of them. However their customer service makes it shopping with them a nice and positive experience. They are always available, helpful and polite and solve any questions or doubts. No need to fight with a robot to get a human being to talk to you!!

A little too stiff.

We got the mattresses in about the estimated/expected time. FedEx informed me via text that the adjustable bases would arrive sometime on saturday June 11th before the end of the day. FedEx refused to give us a time window. I stayed home all day and the bases were a no show. No show also on Sunday June 12th. We're then informed by text that the bases would arrive on Monday June 13th. I awoke just after 7am Monday to find a text message that delivery of the adjustable.bases was attempted at 6:50 am and no one was home!!!!! Now I was angry!!! I made some calls and was assured the bases would be delivered on Tuesday June 14th. The elusive bases did
show up on Tuesday. I will not do any more business with Leva and will tell everyone I know about our awful experience with FedEx. I would not trust FedEx to deliver dog poop.

So far so good, I love it and sleep wonderful through the night, definitely recommend

We like the bed very much. Easy to set up. Comfortable and convenient to raise feet or your head.

Do not recommend. So far we are relatively happy with the split king except that the mattresses do not stay in place on the base. The wallhugging feature which is the reason I went with the upgrade is ridiculous. It does not move back and keep you in line with the bedside table. The USB ports are inaccessible underneath the base so completely useless. Should have saved the $1000 upgrade and gone with the lower level model. Or better yet, another company. Delivery & customer service are horrible.
1. Our deliver was to have been here Tuesday May 17 between 1:30 - 4:30 pm as per the phone call received from Michelle;
2. At 1:34 pm, a phone call was received from the delivery team stating that they would arrive in 20 mins. The caller asked if the way was clear to the room where the bed was being delivered. There was a second voice in the back ground saying something, then the caller said never mind, where do you want the bed dropped? — so in one 38 second call the delivery has gone from being taken to our bedroom to being dropped at our door;
3. At 1:51 pm, the caller phoned again to indicate that they could not find our location. It was discovered that they were at Tobermory, four hours away from our location in Caledonia. There is no excuse for an error such as this when specific directions were provided for our location;
4. A call was immediately placed to customer service. As we had cleared our existing bed out of the room, it was made clear that a bed must be delivered that day, no exceptions. Michelle called me back to state that a second truck would be sent out and the eta was 4pm. This was acceptable to us as this was still within the delivery window of 1:30 - 4:30 pm;
5. At 3:19 pm, the second delivery team called to state that they would be arriving after making another delivery with an eta of 5pm.
6. Customer service was again called to indicate our displeasure. When stating we needed another truck sent out, we expected it to come to us directly. It had been explained that we had classes to teach from 6 - 8 pm. Believe it was Matt with whom I spoke and said the driver sets their own route and is out of their hands. Well it is not out of your hands when you send the driver out with more than one delivery. This whole mess was due to Leva Sleep, it should have been rectified with a truck coming directly to us knowing we had a tight timeline;
7. Delivery arrived at 5:10 pm
8. We asked that since they had changed their line about delivering to the room that they at least place the boxes in the livingroom, which they graciously did. When they were done, each were offered and accepted a cold drink;
9. The weighbill I was asked to sign was far from business like / official. It was an 8.5” x 11” piece of paper with handwritten notations of what had been dropped off. We were not provided a copy;
10. One mattress box was torn, falling apart and the one delivery man proceeded to drag it along our concrete walkway to the house;
11. All sides of delivery truck clearly state free delivery and set-up. Yet no free set-up provided.
12. The back of the truck states old mattress removal yet there was no offer to remove our old mattress. 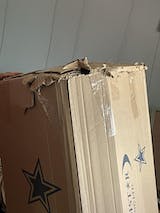 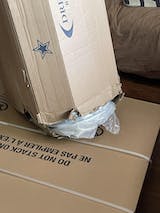 Love the features and the price

I was hoping to get this bed right away after purchase but fedex took so long to drop it off. No complaints with the bed though, it's great but those damn delivery people lost my bed at the depot and it took 12 days to get here.

Good bed but I wanted an extra firm option. Like a board but their firm still has a little bit of give. I like it though

So happy I found these guys. The bed works inside my existing bed frame which was my goal and it helps me and my wife sleep in different positions. Love being able to put the massage on too. I thought I wouldn't use some of the other "techy" features like the usb ports or the lights underneath but I really do. Only complain is I wish I had boughten another set of sheets so I can change them easier

I’ve had the bed for a couple of weeks but just got a firm latex mattress a few days ago. It’s a great combination and the bed works perfectly so far. I’m 73 and it was simple for me to assemble the bed which is a twin XL.

So happy I found Leva after searching for a good split queen for quite some time. Don't go for one of the split at the head only beds. This allows you to life your head and feet independently which is exactly what I was looking for. Delivery was painless as well. Just screw the legs in and away you go!

This bed is quite comfortable. It started off a little firm but the gentleman told me it would soften over the first couple of weeks as it broke in. It is certainly doing that and getting comfier every night. The elevation and other features are great as well